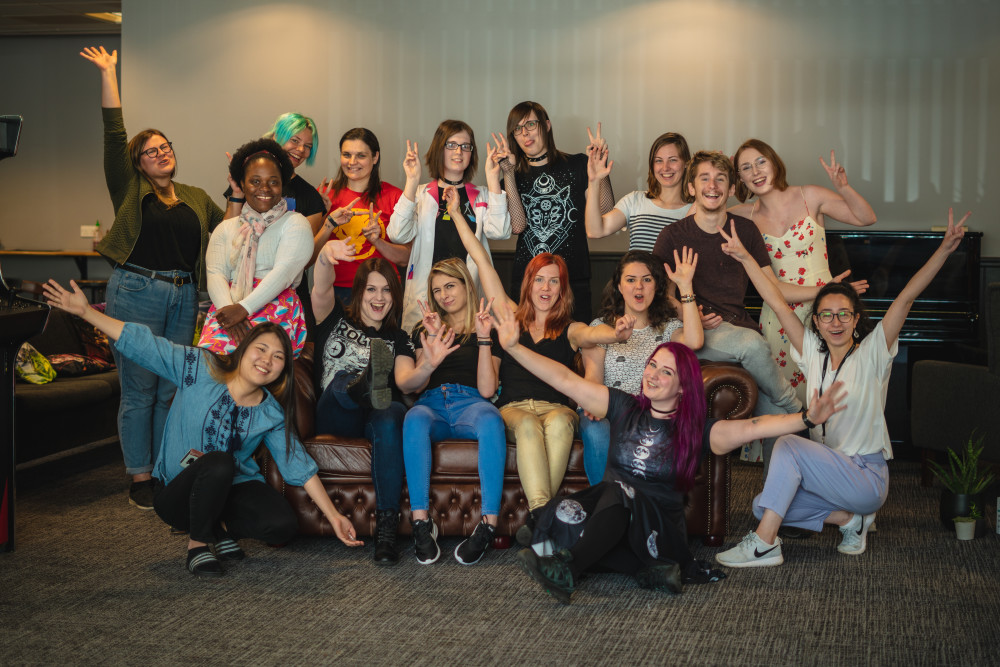 Higher levels of racial and gender diversity have a positive impact on business. This has been shown time and time again, such as in the well-known McKinsey study. Even if you ignore the morality of it – which you should most definitely not – diversity is commercially advantageous.

This is a reality that the games industry – despite its traditional roots as a nerdy white boys’ club – is slowly waking up to. Now the doors are gradually inching their way open for women, people of colour, LGBTQ+ and other minorities.

At Jagex, this change began in January 2018 when Cassia Curran, who had recently joined the company as Head of Business Development, felt “weirded out” by the lack of women. A chat room was set up and was quickly followed by a lunch meet-up. These soon evolved into monthly meetings which the company supported in the form of food vouchers.

Our initial goals were quite straightforward: we wanted more internal support for women, and to help inspire young women to seek out a career in the games industry. The first external event we attended was a career fair at an all-girls school in London, where we shared insights about the many different career paths in our sector – coding, game design, art, leadership roles, translation, analytics, IT, web development and so on.

In time, the first few male co-workers joined the group, keen to learn about the issues we faced. We soon realised that there were other minorities that would also benefit from better support. Soon after, ‘Women at Jagex’ was reinvented as ‘Diversity at Jagex’.

Obviously chat channels for women and LGBTQ+ groups alone didn’t magically create a big shift in company, but it did at least help us feel validated – the importance of which should not be downplayed. And as the group grew in size and confidence, a change in internal attitudes did indeed followed.

International Women’s Day is a good example. For IWD2018 we suggested celebrating women on our games’ social media channels. It was a last-minute suggestion and the internal reaction was negative. People were afraid of touching on what they viewed as a “political topic”. As disheartening as it was to hear that gender equality was somehow still regarded as divisive in 2018 (exactly 100 years on from women being given the vote in the UK!), the lack of time meant that we were unable to push back. In the end the only action was a light-hearted tweet about some female game characters on our social channels.

For IWD 2019, however, we came prepared. We’d won support from key staff members and with the help of our lovely community management team we organised a Reddit AMA (that made it to the front page!). It featured women, from all kinds of positions within the company, answering questions about their jobs. We also published a video featuring some of the awesome ladies working at Jagex. And to celebrate with our game community, we published some new lore about one of the game’s popular female NPCs.

Female staff also received a copy of ‘Women in Gaming’ by Meagan Marie, along with fitted jackets and shirts. Receiving some suitably-tailored swag meant more than you might assume – after half a lifetime in male-dominated spaces, seeing game clothes that weren’t unisex or sized for men was quite special.

Other initiatives have followed, too. We sent an entourage to the European Women in Games Conference in London (which was also co-sponsored by Jagex) last autumn. Jagex also sponsored the first Cambridge Pride this month – there was even a last-minute rainbow-coloured company logo shirt that our group wore on the day.

The most gratifying achievement, however, has been the noticeable shift in the company culture. The freedom to talk openly about these issues has led to many positive developments, such as a code of conduct for internal chatrooms, improved use of inclusive language in internal documentation and better identification of potentially offensive in-game material.

When asked how all of this has had a positive impact for them, one colleague said that Jagex is “the first workplace where I've felt welcome for who I am” and another that forums such as the LGBTQ+ group “have been one of the places I've felt able to open up a little”.

Looking to the future, we aim to raise awareness even further, gain more allies internally and to increase the amount of work we do for BAME groups. There is also an aspiration to appoint a ‘diversity champion’ – ideally a salaried role – to work with HR on initiatives such as internal and external mentorship programs.

I hope our success can serve as a template for others who feel like their workplace environment is very homogenous, and who yearn for change. All it takes is some will and some togetherness. From there who knows how far you might go.