Using influential people to promote your brand isn’t a new thing. Celebrity endorsements have been a go-to marketing tactic for as long as there have been celebrities and marketing. However, what we have seen over the course of the last ten years is a democratisation of influence. While footballers, film stars, and Kylie Jenner still hold a massive pulling power, in 2019 social media has allowed anybody to become influential. So brands are increasingly turning to YouTubers, Instagrammers and Twitch streamers to get their products in front of their chosen demographics.

Gaming has been at the forefront of this change. The 30 top gaming influencers have more than 340m subscribers across major gaming platforms (YouTube, Twitch, Caffeine, Facebook), and a recent report found that ‘social media and gaming’ is now the fourth most popular career choice for UK children aged 7-11 (5.7%), trumping the likes of the police, doctors, actors, and musicians.

However, as with most forms of emergent marketing, how to track influencer marketing’s true value effectively and accurately remains somewhat mysterious.

Levelling up – why influencer marketing is the order of the day

While influencer marketing is increasingly becoming one of the most cost-effective ways to reach a huge pool of potential customers, I would argue its most powerful characteristic is its authenticity. This is a broad generalisation, but essentially people trust people more than they trust brands. A recommendation from a friend, family member, or even just someone you’re familiar with will resonate far more than a brand delivered message.

Another great reason for using creators to market a product, particularly for a younger, tech-savvy audience are ad-blockers. One in four US internet users blocked ads in 2018, and that number is only rising – this poses a huge problem for traditional digital marketing. Step forward, influencer marketing. There are very few marketing methods as likely to gain the fixed and sustained attention of their audience. In a world of second-screen experiences where attentions are split, this is a particularly attractive proposition.

Forging a legacy – bringing a classic game to mobile

Our leading titles, medieval fantasy MMORPGs RuneScape and Old School RuneScape, have enjoyed a long and illustrious lifespan and are supported by passionate and incredibly dedicated communities. We’ve renowned for producing high quality PC games, but in October 2018 ventured into the unknown by bringing Old School to mobile. It was one of the first fully-fledged MMORPGs to feature cross-platform functionality and offer the same immersive experience on mobile and desktop.

More than 270 million accounts have been created across our games, but unsurprisingly for an 18-year-old game, many of these players have lapsed. Our task as a social and community team was to use mobile as an opportunity to bring back as many short and long-term lapsed players as possible. Influencer marketing seemed like an obvious choice to spearhead our efforts. We broke out our strategy as follows: 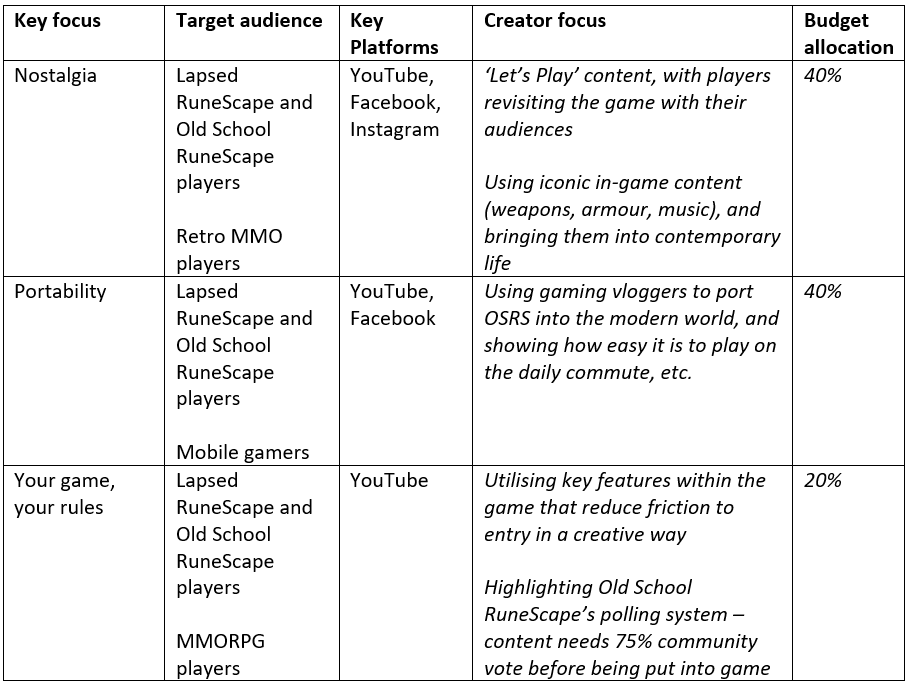 One advantage our 18-year heritage gave us was the fact that many creators began their careers producing RuneScape content. This gave us the privileged opportunity to tell credible and emotive stories about their history with the game. Building this approach into a realistic timeline was the next step – we eventually decided on three phases to execute: launch, conversion, and re-heat.

Measuring the impact of influencer marketing is a constant thorn in the side of anyone using influencer marketing, and it was no different for us. We attributed two main key performance indicators (KPIs) to our campaign, one focused on reach and brand awareness, and the other on conversion. Whilst we found later in the campaign that these KPIs often ran at odds with each other, these goals formed the basis of our success criteria – a £45 cost per thousand views (CPM) and £4.50 cost per install (CPI). These were comparable to our digital marketing benchmarks, and well within our positive return on investment (ROI) threshold.

Once we had a strategy and knew what we wanted to achieve, our focus shifted to the creators themselves.

Before diving into the nitty-gritty of influencer outreach, it’s worth identifying the internal resource you have available. Bear in mind that reviewing content is only part of the process – there are contracts that need to be drawn up and signed, payment plans to put in place, liaison requirements between influencers and their agents… It’s a massive time-drain with some really quire specific knowledge requirements. If you’re looking to create a campaign at scale, the time required to get it right can be a deal breaker for some.

We had the budget, but not the internal resource required to do the job properly, so we employed an agency to help us with outreach (there are also influencer search and liaison platforms for those who perhaps have more internal resource, but not enough to do a campaign all by themselves).

Our demographics were 18-30 year-old males based in English-speaking countries. We wanted influencers who were either playing or had played RuneScape and had an engaged, positive audience.

Once you’ve identified potential partners it’s important to think some things through before you agree to specific creatives and costs:

Your choice of creators will likely define the success of your campaign, so giving yourself enough time to engage in the process properly will much improve your chances of success. During the course of the Old School RuneScape Mobile initiative, our agency identified a longlist of creators that fitted the bill but even then, validating them took two members of staff around 2-3 days of work each.

In Part 2 of this blog we will look at executing the plan and the challenges of measuring its success.