I’m in a dark cavern of a place; I can’t make out how high or how wide the space is. It’s just so damn big. Opaque mist swirls around my feet, covering the ground ahead of me. In the distance, I hear the deep rumble of a volcano on the edge of eruption; I can feel its tremors through the soles of my boots. The atmosphere has me on edge. 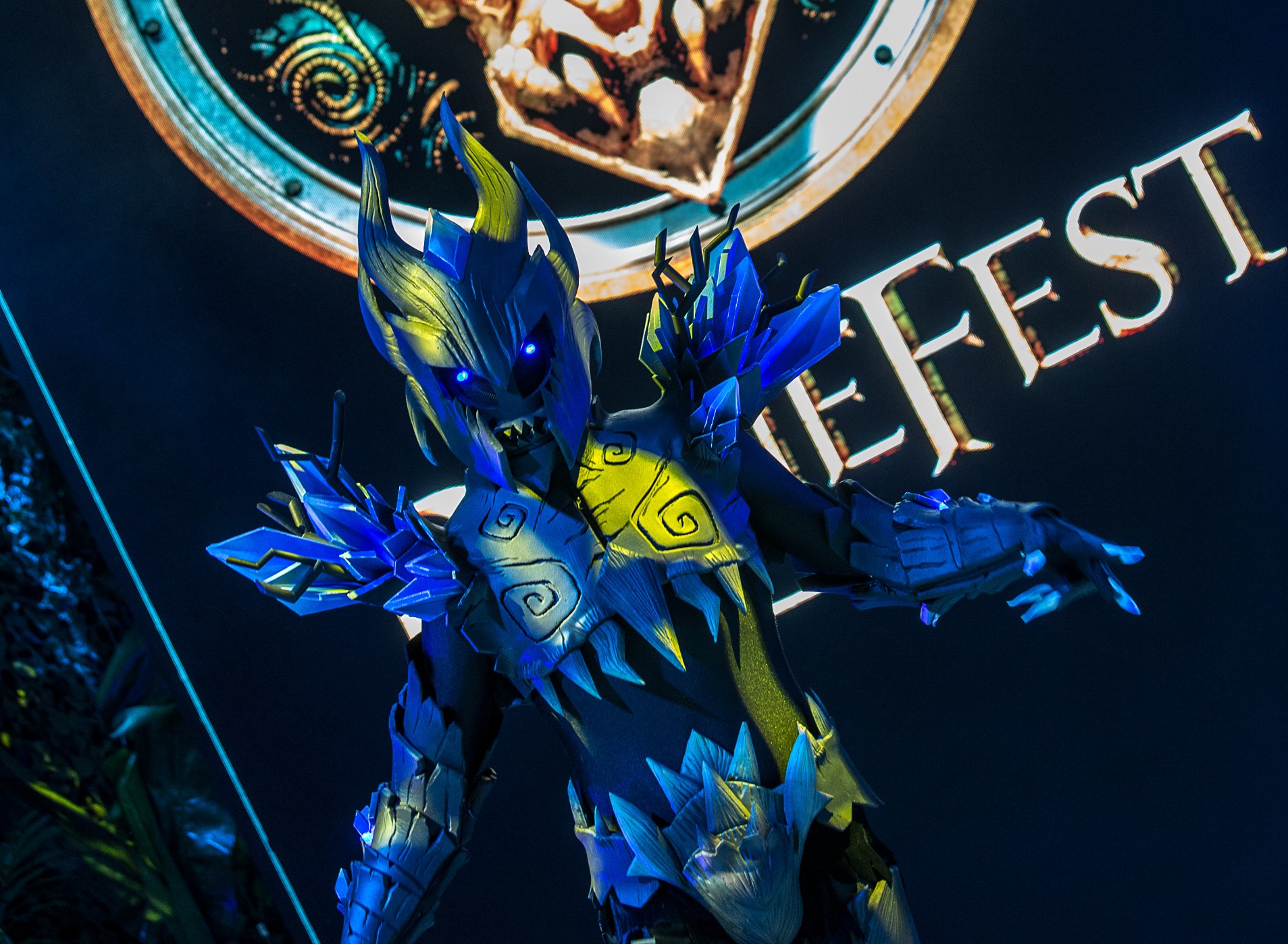 In the shadows ahead, two small piercing, bright, electric-blue lights emerge. They’re moving towards me at eye level. Eyes… fierce, glowing eyes! From the shadows, the form starts to become clear; a monstrous shape. Huge, edged with sharp points, all black and blue, except for those glowing eyes. I recognise it – The Dark Lord, a creature of Gielinor, a deathly horror through which no light can pass.

He’s coming for me… “Good morning Rich” chirps The Dark Lord cheerily as he removes his gruesome headpiece and switches off his blue eye lights. “Don’t we need to be the other side of these wall drapes?”

Pushing the drapes aside, we’re just in time to see the 10m high volcano prop fire a test eruption. Huge sub-woofers fill the space with deep explosive sound effects, jets of sparks shoot into the roof and some clever LED trickery sends lava flowing down the volcano’s sides. 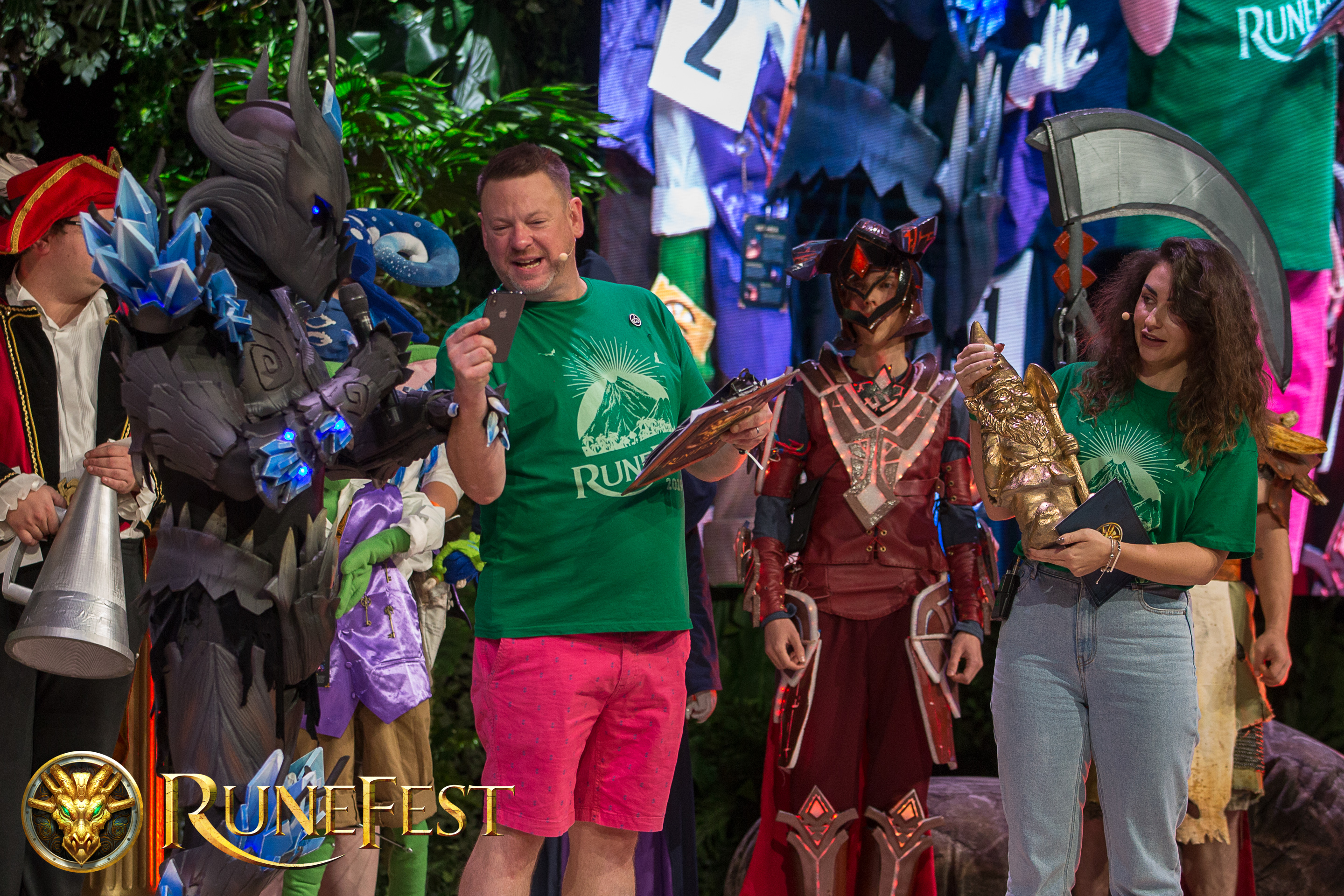 For Team Jagex, scenes like this happen every year. Its RuneFest weekend – our annual festival where thousands of RuneScape and Old School players come together for a convention that’s more impressive and immersive than any other event we run during the year.

The Dark Lord is my buddy Teezkut, a celebrated cosplayer and RuneScape member. Every year he creates a spectacular costume based on an iconic game character and together we host The Cosplay Show at RuneFest. That’s what RuneFest is about – Jagex staffers and players coming together to make the event something very special for all of us.

RuneFest takes over more than 8,000 square metres of Farnborough Exhibition Centre and turns it into an extension of the game’s world of Gielinor. Here we build an enormous set that recreates parts of our fantastical world for players to adventure into, complete with real-life skilling activities.

RuneFest is where friends reunite – players with players and, importantly for us, players and us Jagex folk. Several hundred Jagex staffers have given their time to be part of the weekend – taking our in-game, on-stream, and online connection with players out into the real world.

At the heart of Jagex is a mission to connect and inspire through play. We believe that maintaining a close connection with players was key in transforming RuneScape and Old School from live games to living games.

Living games go beyond the game screen with experiences and content for players to interact with – be that online, on streams, on social channels, or at events that bring players and game makers to together in person – and RuneFest is our ultimate meet up. Think E3 or Gamescom mashed up with The Crystal Maze and Disney World and you’re somewhere close to the RuneFest experience.

RuneFest offers attendees a multitude of experiences and activities. The space is divided into six main attractions: a 1800-seater main stage from where the keynotes, game shows, and talks are given; a LAN with hundreds of PCs; an expo area with props and dressing recreating RuneScape’s dinosaur-infested area of The Land out of Time and Old School’s Fossil Island; a Panel Stage to host Q&A sessions; a social space for players to meet and lounge, plus the always-in-demand merchandise store with exclusive new t-shirts and collectible designs.

RuneFest is for our whole player base. Our most enthusiastic of fans travel from all over the world to be part of the club that attends in person, while the wider player base watches the marathon live stream of keynotes and interviews. This year we broadcast an incredible 12 hours of live content from the stages and from our on-location studio. 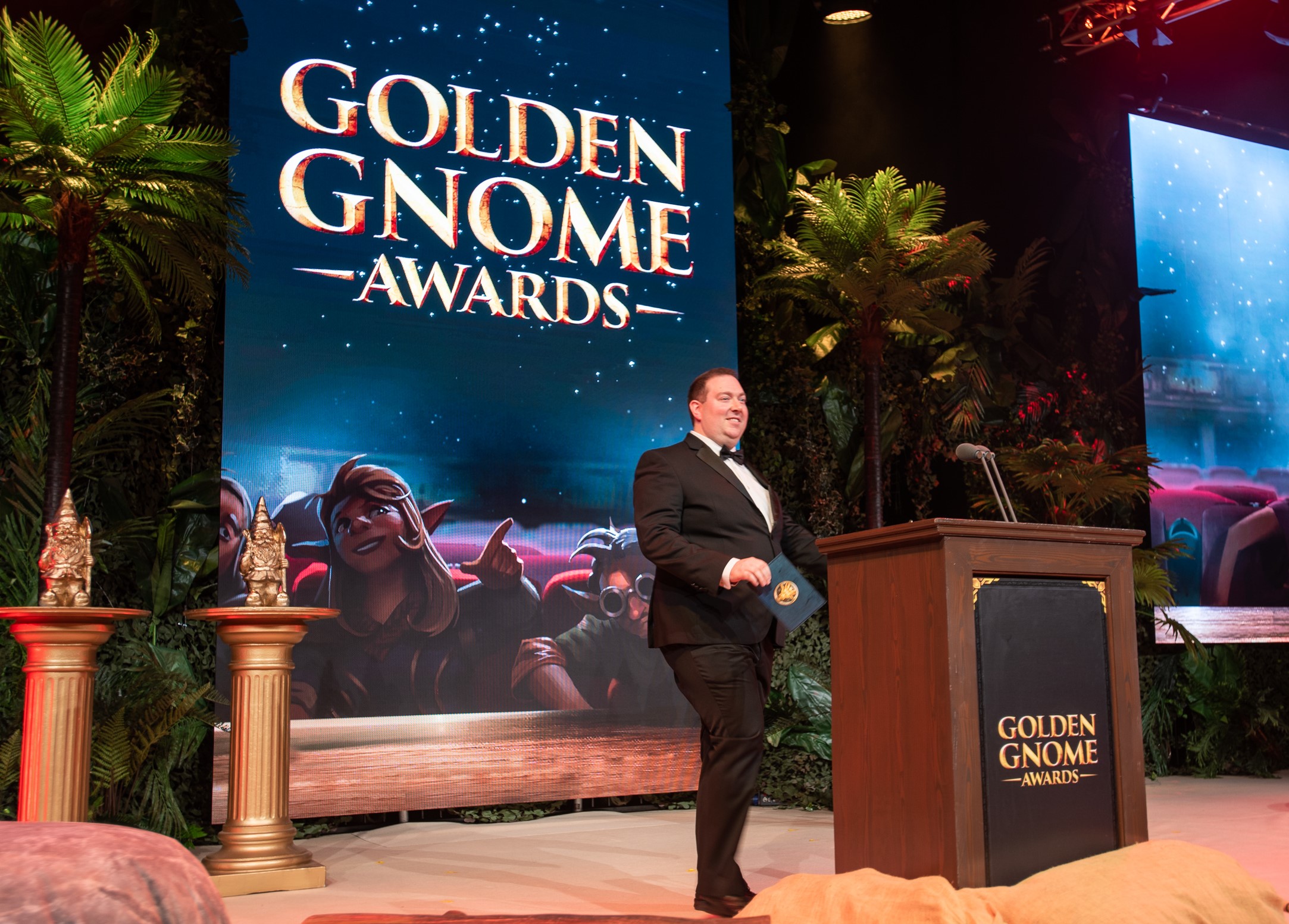 For attendees and stream viewers, RuneFest 2019 began at 6pm on a Friday in early October. Once everyone caught up with old friends, the evening’s highlight was a new event for RuneFest. One that shone the spotlight of the stars of our community and delivered them a gala presentation in the Golden Gnome Awards Night. The Golden Gnomes is always one of the community’s favourite parts of RuneFest, but in the past it was a 45-minutes slot during the Saturday afternoon. This year, we gave players a full-on gala awards night, with high value show and entertainment to deliver the full red-carpet experience.

The Golden Gnome Awards celebrated our community’s achievements throughout the last year. We named the best streamers, best artists, and best video producers. We crowned our Community Champion for her amazing work in producing RuneScape comic strips and animated cartoons.

The following day, Saturday, the RuneFest experience kicks into overdrive. Our opening ceremony teases some of the announcement to come during the day and it gives us a moment to thank you to our community for their support of Jagex Charitable Giving. We announced that, with their support, we had together hit a fundraising total of £175,636 so far in 2019, which we divided between our three mental health charities live on stage to enormous cheers.

After the opening ceremony, a black drape, which kept the expo area hidden on Friday, is dramatically removed to reveal a Jurassic-themed playground, inspired by landmasses from RuneScape and Old School, for players to immerse themselves in. There are selfie-spots at every turn and skill-based activities for players to complete and earn collectible rewards.

Tunnel entrances in the side of the volcano prop hosts a gaming cave, providing players with hands-on experiences of the new content announced at the show; including RuneScape’s new Archaeology skill and the latest beta build of RuneScape Mobile. Just-for-fun pieces gave players entertainment to enjoy ad-hoc, including a dinosaur-themed mini golf course.

Meanwhile, over on the mainstage, we put the spotlight on our studio teams to deliver blow-you-away keynote presentations. The RuneScape team reveal a new skill for the game: Archaeology, raised level caps to 120 for Farming and Herblore, introduced The Ranch out of Time where players will be running dinosaur farms, and revealed that an Early Access programme for RuneScape Mobile will arrive in the next few months for every RuneScape subscriber. 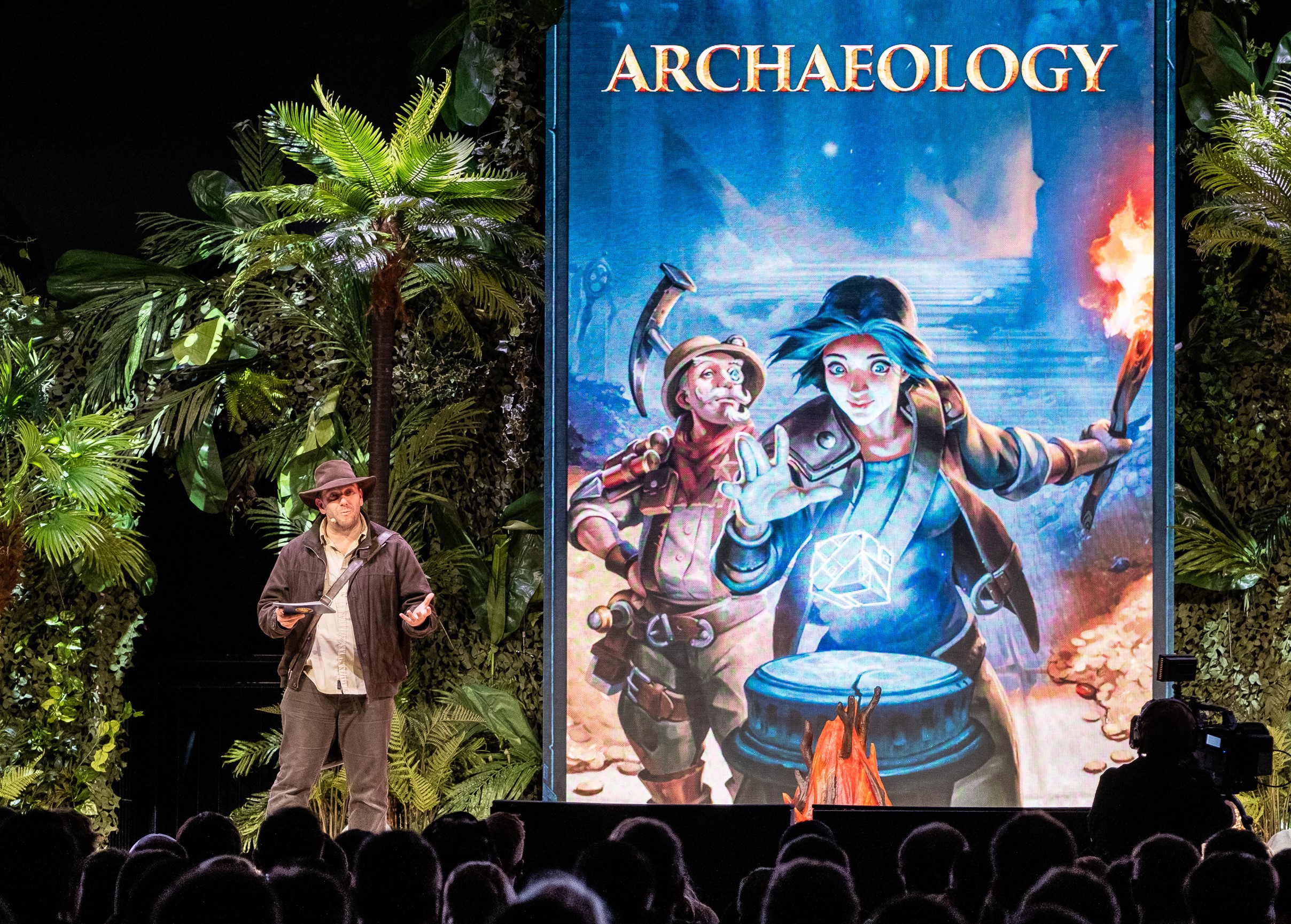 The Old School team’s keynote announcements were met with hollers of approval and applause too. They announced a new expansion for the game, complete with new city, quest, new skilling content and a new group boss. Perhaps the biggest shout of the show followed the announcement that a new Clan system and a Group Ironman mode will be coming to the game.

In addition to giving a glimpse into the future, the main stage provided entertainment throughout the day. A live bake off saw members of the development team and content creators cooking iconic meals from the games, we had the catwalk of creativity that was The Cosplay Show, we dug deep into the games’ lore, hosted a quiz show, and a Q&A with some of our most famous content creators.

For all the effort we put into make RuneFest a success, the community do just a much. Whether through designing their costumes, making their own badges and gifts that are given out, to running a series of fringe events. This year the community hosted their own SpoonsFest, a Thursday meet-up in a nearby Weatherspoons venue, and NoonFest, a Friday lunchtime event and charity auction that raised more than £5,500 for SpecialEffect.

Where everyone knows your name

What happens in a RuneFest weekend takes around 10 months of planning and production to pull it all off. It’s a total internal production led by the Events and Live Production teams with support from pretty much every department across Jagex. It’s our biggest company-wide collaboration and has become Jagex’s biggest team building experience of the year.

Since 2010, RuneFest has been a way of humanising Jagex with players. It enables us to connect with players and, for the community, to connect with us, the actual people behind the in-game and on-stream names we use. We always want RuneFest to retain its intimacy and build on the close connection we have with our players – essentially it’s part of the game world in real life; the place where we all catch up with old friends, some of which we won’t have seen since the previous year’s event.

I’ll leave it to one of the player comments we received to summarise the RuneFest experience:

“RuneFest was one of the best experiences I’ve had in my life, it gave me the chance to meet long term friends and clannies that I've known in RuneScape. Getting the opportunity to meet the creators and Jmods behind the game was insane and made the game feel very communal and made me feel cared about as a player. Going to RuneFest has opened a lot of opportunities up for me in game, like getting player moderator status, and leadership in an amazing LGBT+ clan. Without RuneFest, I don't think I would had been able to be so involved with my community. It brought people together from all around the world, into one big celebration of the game we all enjoy together.”